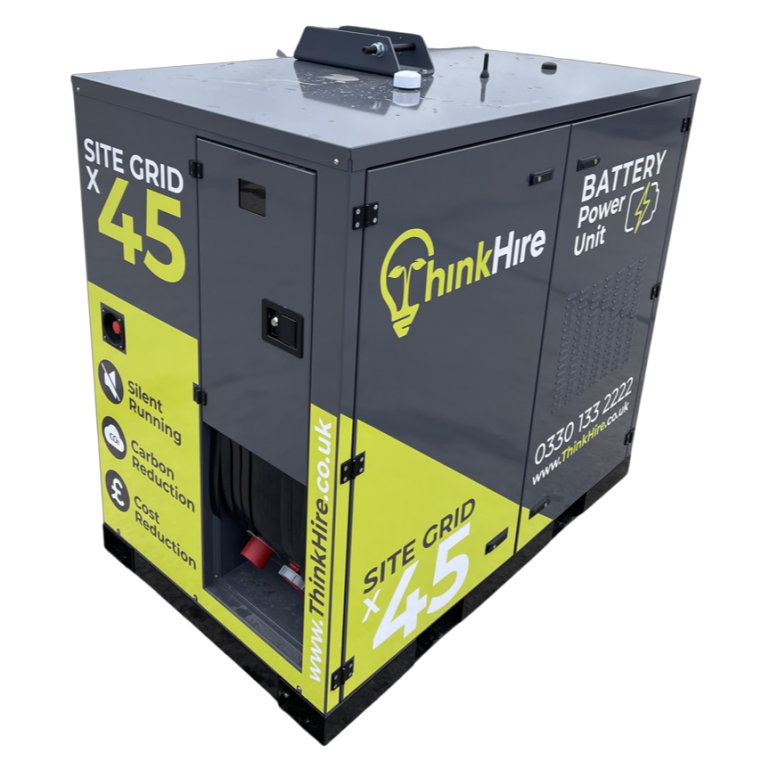 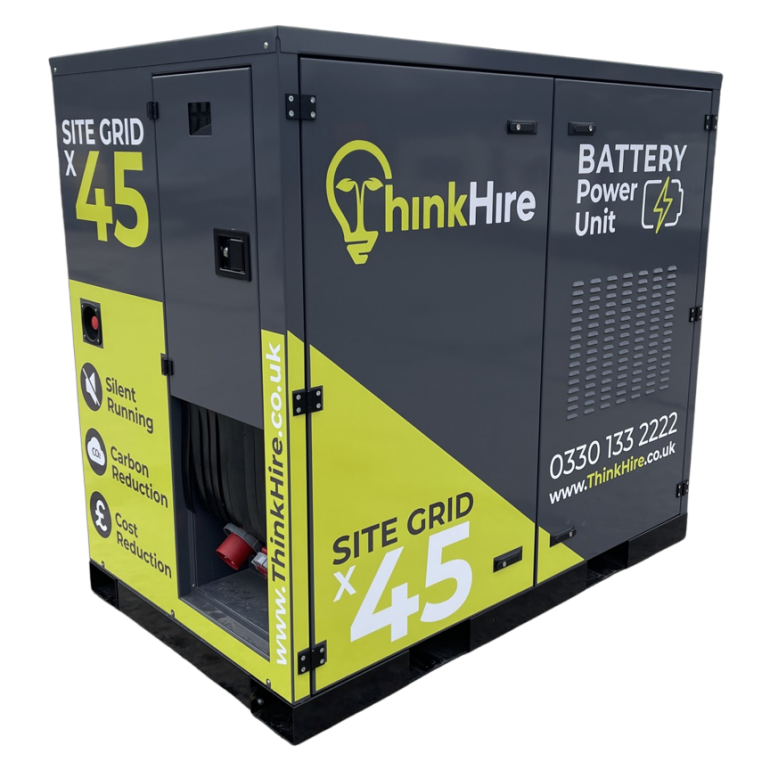 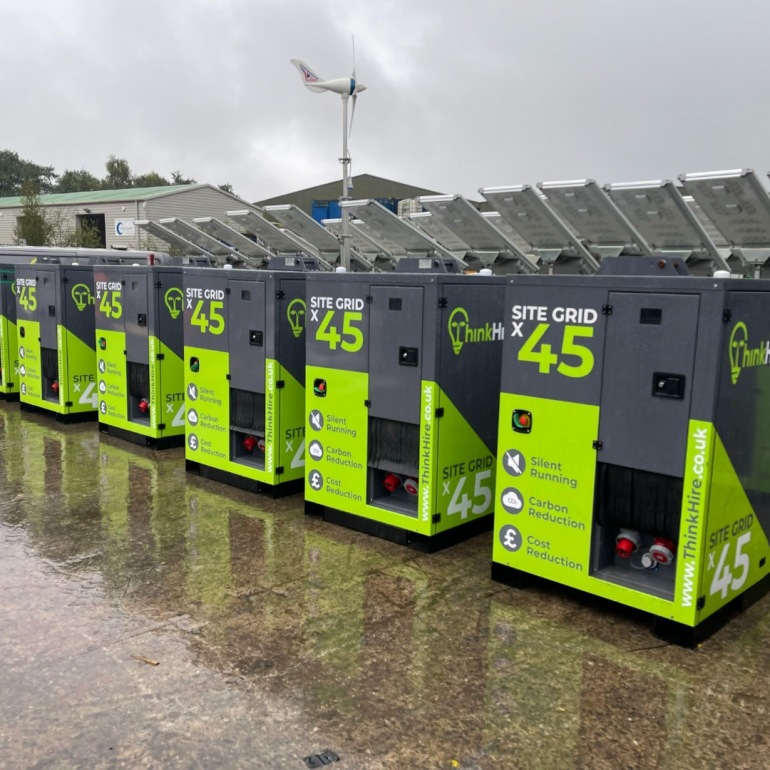 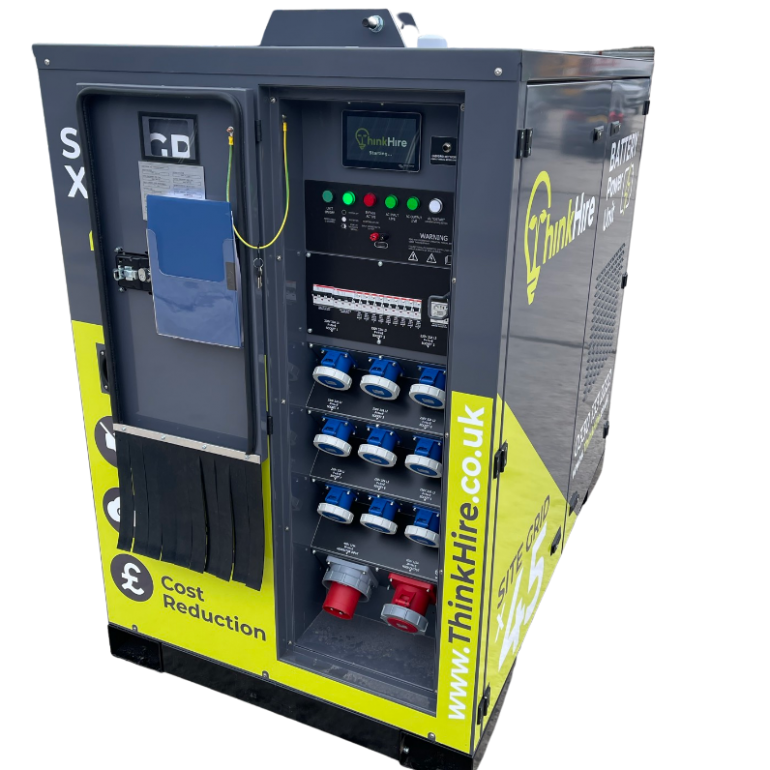 SiteGrid X45, our three-phase 45kW and 45kVA hybrid battery generator systems for hire, offers a convenient and efficient method of delivering power to any site environment without a grid connection. Whether a site needs power for lighting, a welfare cabin or equipment SiteGrid will deliver power far more efficiently than a generator alone.

The SiteGrid X45 utilises generator power, and renewables if available, to store power in a sophisticated battery bank with a dedicated monitoring & control system, delivering silent power from the battery when needed. The generator will only be started when loads demand more power or to top up the battery. Significantly reducing emissions, the size of generator required and fuel costs.

Also, for intelligent power management, SiteGrid has an optional Energy Management Unit (EMU) which allows six separate loads to be fed independently and programmed with their unique schedules.

Hybrid Energy Management System upgrade. The additional features of our HEMS upgrade are:

The HEMS we offer allows not only the delivery of power to the site to be optimised, but also the control of the power consumption on site also.

Below are some scenarios with the benefits explained.

Often perimeter lighting around the site is left on 24/7 when in reality it is only required during the hours of darkness. If we allow for 500W of LED floodlights on a site, but they remain on during the daytime from 6am till 8pm, that equates to 7kWh of consumption that in essence was not required. Our HEMS option contains a light sensor which can be used to control one of the outlets. When the sunlight reaches a certain level, the socket turns off which would mean the floodlights turn off. Then as the sun sets in the evening, the power to the socket comes back on which would turn the lights on automatically.  This can save approx.  60% of energy used for that circuit and approx. 1 hour of generator run time per week based on a 45 kVA generator.

Drying rooms on site count as a considerable load – typically pulling approx. 4kW. Frequently they will turn on at the end of the shift and run until the morning when someone will arrive on site the next day and turn the driers off. This may be from 6pm through to 6am the next day – a total of 12 hours giving a power consumption of 48kWh. This is larger than the battery bank capacity so we know that the generator will start up in the early hours of the morning to recharge the low batteries.

However, we can be certain that the clothes in the drying room will be dry within 3-4 hours, so our HEMS option would allow control of the socket to the drying room so that the power can be turned off at say 10pm and then turned back on the next day. This reduces the overnight consumption from the drying room down from 48kWh to 16kWh. This contributes considerably to help alleviate the overnight power consumption which in turn means the site can get through the whole night period without starting the generator. This would save approx. 60% on that circuit and around 6 hours of generator run time per week based on a 45kVa generator.

Non critical loads can be shed if the system is running out of stored power or the loads were such that the generator would need to start to support the loads.  This is difficult to quantify a saving as the loads are unknown at this stage but this ability will reduce unnecessary energy usage, especially during night hours when there is a tendency to leave cabin lights and heating on, if these were considered non critical during the night they would be turned off if required automatically. 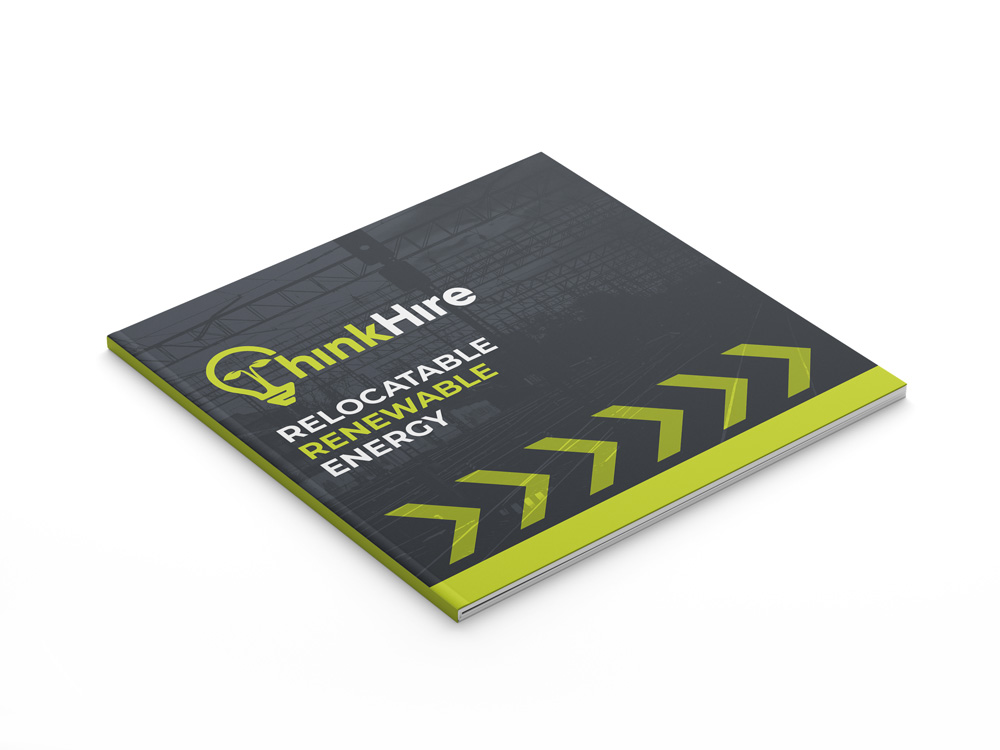